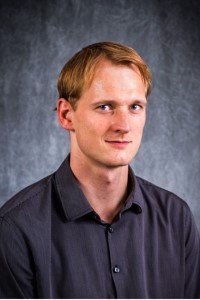 Rico Meier studied “International Physics” at Leipzig University in Germany. During his master’s thesis about the “Ultrasonic transport properties in solid matter”, he was exposed to further insights into material physics and ultrasonic characterization methods. His passion for these topics since has stayed with him throughout all his research. In 2008, he joined Fraunhofer CSP in Halle (Saale), where he developed new ultrasonic methods based on guided waves (LAMB-waves) for in-line characterization of photovoltaic module components. He received his doctorate for this work in 2016. He then stayed at Fraunhofer CSP as head of a team focused on new material characterization methods, finite element simulation, and advanced module reliability. He joined ASU in April 2018, with plans of achieving a broader scientific perspective and continuing research in material science and photovoltaics. Among other new interesting topics, ultrasound transport will be a central part of his ongoing research activities.